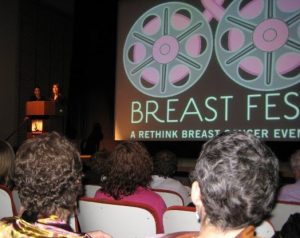 At age 19 Jonna Tamases is a student and aspiring stage performer. She has oversized breasts that she wants to reduce. During her checkup with the doctor for a breast reduction she discovers she has cancer.

In Canada, an estimated 22,700 women in Canada will be diagnosed with breast cancer. That is 437 women diagnosed every week. One in nine Canadian women will develop breast cancer in their lifetime. One-third of these women will die.

Jonna Tamases’ experience with cancer was presented on the big screen in her film Jonna’s Body, Please Hold. It was showcased at the second annual BreastFest in Toronto.

When Tamases was diagnosed with Hodgkin’s disease at age 19, she recalls, “I was pretty angry…I couldn’t conceive what it meant to be facing death.” The next year, she found out she had large cell lymphoma. “Luckily in my case, the chemotherapy worked and the cancer died before I did,” she said.

During her battle with cancer, she didn’t have enough physical strength to go to school or perform on stage. “It’s so easy to feel reduced to be just a cancer patient that you lose sense of all that you are,” said Tamases. “But it’s not all that we are. We’re so much bigger than our tumors.”

Twelve years later, she found out she had breast cancer. “I suspect it was due to the radiation that I had in the area to treat the first cancer,” she said. Often secondary cancers appear in areas that were previously radiated.

She opted for double mastectomy instead of chemotherapy. “Chemotherapy was really hard for me, it was very intense and I was not looking forward to having to go through that again,” said Tamases. She also didn’t like the idea of waiting and seeing, and wanted to move on with her life.

“I thought, I had twelve good years with my perfect little breasts and if I have to say goodbye to them that’s alright for me,” said Tamases. “Luckily I had a very loving husband, who assured me that my boobs were not the reason he married me and so we sort of faced it together.”