Gisele Nett is the alter-ego of actress and writer Jonna Tamases, previously known for her play Jonnaʼs Body, Please Hold, which was nominated for two Los Angeles Ovation Awards — Best World Premiere Play and Best Lead Actress. Sheʼs an accomplished sketch comedian and former Ringling Bros. circus clown who believes in the power of comedy to help us connect.

For her new work, The Gisele Show! Symphony in Be Flat, Jonna becomes Gisele Nett, quirky, lovable optimist from Hamburg, Germany. Gisele is a former button maker, now unexpected storyteller, who brings her hilarious and poignant insights to the true story of her cancer and double mastectomy. With music, playfulness, and captivating anecdotes, The Gisele Show!

Symphony in Be Flat is a
touching and laugh-filled show
about life after cancer
and loving the skin youʼre in.

To elevate the evening even more and enjoy a sense of community, bring your dinner at 6 pm to connect with others before the show. 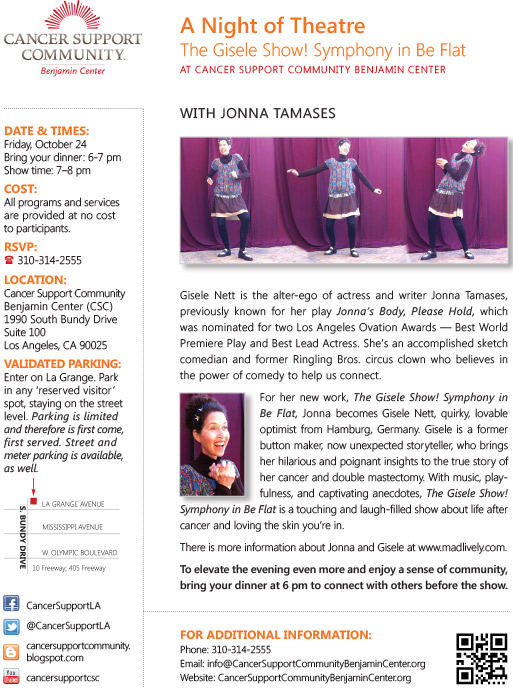